Finally managed to get down the plot for the first time in several months. 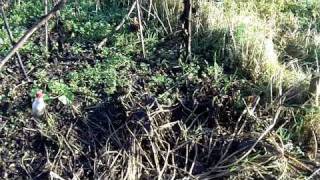 The French Marigolds appear to have been too wet when they fruited last year and don't look like they shattered their seeds.

The Sunflowers were rotting in place, with most of the seeds (and empty shells) on the ground.

The (now identified) weed at the front of the plot - Horseradish - died back but is still there just below the surface.

The Purple Sprouting Broccoli in the second bed looked a lot better last summer. Pigeon damage and a lot of wet weather have made them manky looking. A lot of cabbage whitefly on the leaves.

There's also a large number of weeds both in the beds and on the paths. Given I worked them last year, and half of the area I've designated as another 3 beds has been covered by sheeting, it shouldn't be a little easier to get the plot under control this year. 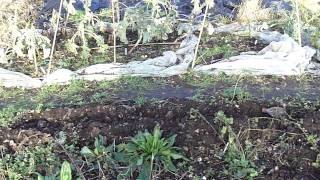 Pulled the sunflowers and dug over the soil they were occupying. I might have been a tad too early, given the reason for leaving them in the soil was to avoid waterlogging and to give the soil a little cover.

Tried digging up some of the horseradish roots to get rid of it, but despite the work I did last year it looks like I not only didn't make much of a dent, but that what I did mange to clear has simply grown back.

I pulled the calabrese that I didn't even touch (because it grew after I'd stopped going down there regularly and flowered before I cut it), and cut some mushy/pigeon-damaged leaves off a number of purple sprouting broccoli plants. A few of the PSB had to be pulled because the whole stem was mushy.

Used a fork to smash through the French marigold fruits, but don't hold much hope for them growing as they didn't shatter. Did a bit of weeding in the front bed, mainly just pulling out dead weed growth by hand.